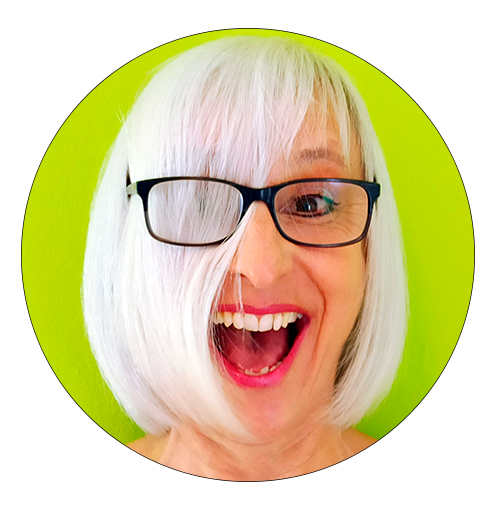 Of British origin (but now Spanish), she’s lived in Barcelona since 1989. B.A Theatre graduate of the University of Exeter (United Kingdom), she then trained at Fooltime Circus School (Bristol, England) and refined her education with the best teachers on the performing arts scene (among others Dario Fo, Nola Rae, Michel Dallaire, Eric de Bont, Avner The Eccentric, Bim Mason, David Glass, Carlo Bosso).

CLOWN
Since 1985, she has performed in festivals and theaters throughout Spain with her shows “Footless” and “Just Say Yes!”, and with Alex Navarro in “Niu Adventurs”, as well as throughout Europe with “Primigenio” with Cia. Teatro de Pronto.

PRESS
The press has said: “splendid”, “the audience couldn’t stop laughing”, “she’s able to communicate even with the person who looks but doesn’t see”, “Caroline captivated the audience”…

CLOWN COURSES
She has taught clown courses since 1998, throughout Spain, and internationally in Las Vegas (U.S.A., for Cirque du Soleil artists), New York, Portugal, Germany, Puerto Rico, Costa Rica, Peru, Mexico and Colombia. By 2018 she has taught more than 250 courses for over 4000 students. She also teaches Corporate Clown Training workshops.

AUTHOR
Her book, The clown in you, has become a reference in the world of clown and clown pedagogy. + info at www.theclowninyou.com. The book is also available in Spanish El payaso que hay en ti, and Portuguese, O palhaço que existe em você. In 2020, she published her second clowning manual, Clown yourself, which has also been translated into Spanish under the title, Apayásate.

SPEAKER
The combination of her physical and verbal expressiveness with her continuing education as a speaker at Toastmasters International (since 2014) and the Professional Speakers Association Spain (since 2018), make her a unique and special speaker on finding the funny, becoming resilient and red nosed leadership.

Some words from the author

I started writing The Clown In You after spending almost a year hearing a nagging voice in my head saying, “Clowns have to write books about their art – we have so much fantastic (and important) information to share. We’ve also got some great stories to tell. There’s a need for more didactic material. Someone really should make the effort.” Finally I took heed. “Ok, ok, I’ll write the book, I’ll do it… if only to shut you up!”. Yes, I sometimes dialogue with my own madness, or, as I prefer to call it, with my foolhardy heart. I am a professional clown after all, I do a lot of odd things things. I’m also prone to throwing myself into creative adventures just for the fun of it. I did the same with this book, I threw myself in at the deep end.

Throughout my years of training, performing and teaching I’d taken endless notes. I had filled books with the ideas and experiences I’d had with clowns and clowning. I always made a point of jotting everything down, not only to be able to keep learning from my notes or relive incredible clowning moments, but also because I love playing with words. Writing isn’t so different from the circus arts, there’s certainly a whole load of juggling, wire-walking and flying through the air to be performed!

The first thing I did therefore, was get out my old notebooks and re-read everything. However, although the anecdotes, exercises, quotes and such like where fascinating, there were so many seemingly disconnected entries, they made me reel. It felt like I was standing in front of a gigantic plate of spaghetti. I had this huge glutinous mass of information sprawling in front of me, but what was I going to do with it all? Fortunately, life soon upturned the plate on my head. I was invited to Mexico to run a series of clown courses with my husband. On arrival I had such severe jet lag I woke up before dawn every day with nothing better to do than use the time to create a structure for the book.

My Mexican students gave me a lot of the pointers I needed. The questions they asked us about clowns and clown technique, about how to improve their improvisations, perfect their humour, and play more successfully on stage helped me identify all the main chapters and some of the sections. The problem was that I also discovered I had many questions of my own. Why were clowns funny? What were the essentials for comedy? Why did the instructions we gave work? What did the successful students do in their improvisations? Why do we laugh? How can we strengthen our sense of humour? What is the clown’s basic philosophy? What psychological challenges do they face? These, for me, were important points to investigate and include as content. (I was after all writing the book that I wanted to read!)

It became obvious to me that I had only half of the information I wanted, to know and that I’d have to conduct a thorough investigation into my art and its artists in order to get to the bottom of all these mysteries. I started the ball rolling on various fronts. The most obvious place to start was in the regular clown classes I teach. I began experimenting continuously with new exercises, with the instructions I used and the feedback I gave. I also began to pay greater attention to what students needed and to the way they responded to the different clown topics. I observed the problems and breakdowns some of them encountered and noted which were the most common or successful ways of confronting and overcoming them. I became a student of my students, learning from them. I interviewed them, asking them to give me their opinions or tell me what they thought clowning was all about, and I paid close attention to their ingenious and often hilarious improvisations.

My research also led me to conduct a series of interviews with my friends, the professional clowns who had as many years of experience, if not more, as I had. I soon found out that, although professional clowns may not write books about it, they do love talking about their art. Furthermore, they’re all more than willing to share their knowledge and experience with whoever’s interested. I asked them why they were clowns, where they got their inspiration, what motivated them to continue in the profession and what they had learned over their many years performing all over the world. They told me their stories and made jokes about the crucial moments in their careers. I marveled at all the different angles on clowning we had and laughed wholeheartedly with them. That’s the great thing about clown research: it’s not only interesting, it’s also extremely entertaining!

The third area of research, that matched the other two in interest and enjoyment, I undertook in my daily life. I have the good fortune of living with two clowns; my husband, Alex, and my daughter, Amara. Alex is a hilarious professional, but my daughter has made me laugh since she was born. They have both made important contributions to the book. Alex supported and helped me throughout the creative process. He read my texts, shared his ideas, passed me information that might prove useful, debated clowning truths with me into the small hours of the night, accompanied me to clown shows and, of course, created with me the clown pedagogy that’s the backbone of the book. Amara, on the other hand, gave me lots of clues to follow up on, especially for the two chapters on game playing. I’ve used a few of the wonderful things she said or did as a young child in the book, but I have so many more…I’ll have to write a sequel!

But before I foolheartedly set sail on the next clown adventure, I’ll take this opportunity to encourage you to take this book home with you. I sincerely hope you find my discoveries useful, inspiring and enjoyable. I hope too that it encourages you to make yourself happy making others happy.

Find the clown in you and never let him or her out of your sight again!